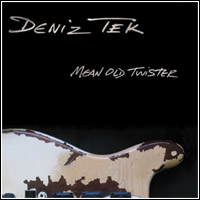 Originally from Ann Arbor, Michigan, the guitarist / singer / songwriter has long been based in Australia, maintaining an active and prolific solo career as well as spearheading Radio Birdman's ongoing revival. He has also toured and recorded with many of the iconic figures of Detroit rock's greats: MC5, The Stooges, The Rationals and Sonics Rendezvous Band.

Standout tracks include the straight ahead, high-powered guitar rockers Burned Black and Prison Mouse; Comanche, a shimmering surf instrumental; the Stonesy ballad Table For One; and Free At Last, an all-acoustic diversion from the electric guitar attack.

Mean Old Twister was recorded with the same band which appeared on Detroit. Drummer Ric Parnell is best known for his work in Spinal Tap and Atomic Rooster. Bassist Bob Brown has been working with Deniz since the 1992 Australian tour supporting Deniz's first solo album Take It To The Vertical. Lending a keen ear to the process, Radio Birdman bandmate and famed producer Rob Younger stepped in to supervise the mix.